We add a mini player to the MVC variant of the sample app found in our App Architecture book. We adjust our storyboard and discuss how to adapt the architecture.

00:06 We recently launched the early access version of our new book, App Architecture. Today, we'll add a new feature to the example app from the book.

00:24 The app lets us record and play back voice memos. The recordings are saved in a folder structure, which we can freely organize by creating new folders and subfolders. When we select a recording, it opens in a simple player.

00:58 In the book, we wrote out a simple voice notes app in various architectural patterns, but adding a feature might work differently in each architecture. Today, we're working with the MVC version — the most commonly used architecture in Cocoa — and we'll see what we need to do in order to implement some changes.

02:21 For the new version, we want to wrap this entire split view controller in a new container, which will be displayed at the top of the screen. At the bottom, we'll have another container holding the mini player. As a first step before updating our code, we're going to draw out these changes in the storyboard.

02:54 We add a new view controller with two container views: a large one on top, and a smaller one for the mini player at the bottom. Using layout constraints, we pin the container views to the superview's edges, we add a vertical constraint between the two, and we give the player's container a fixed height.

06:51 We also move the conformance to UISplitViewControllerDelegate, and we move the used delegate method into our new view controller:

06:57 We update the type of the root view controller in our storyboard, run the app, and see that everything works the same way as before, with the addition of a blank space where the mini player will go.

07:31 As a side note, we should mention that the sample app also supports iPad — hence the use of a split view controller. We are ignoring this fact in today's episode and instead focusing on the layout on iPhone.

07:50 The next step is to present the play view controller modally instead of pushing it onto the navigation stack. Back in the storyboard, the player is opened via a segue. We change this segue's kind from "Show Detail" to "Present Modally." This makes the player show up from the bottom of the screen.

08:37 We need a second player to go into the empty spot of our root view controller. We duplicate the play view controller in the storyboard, removing some of the subviews not needed for the mini player, like the text field and the label for the name of the selected recording.

10:46 Running the app, we now see the mini player embedded at the bottom of the screen, even though it doesn't yet do anything: 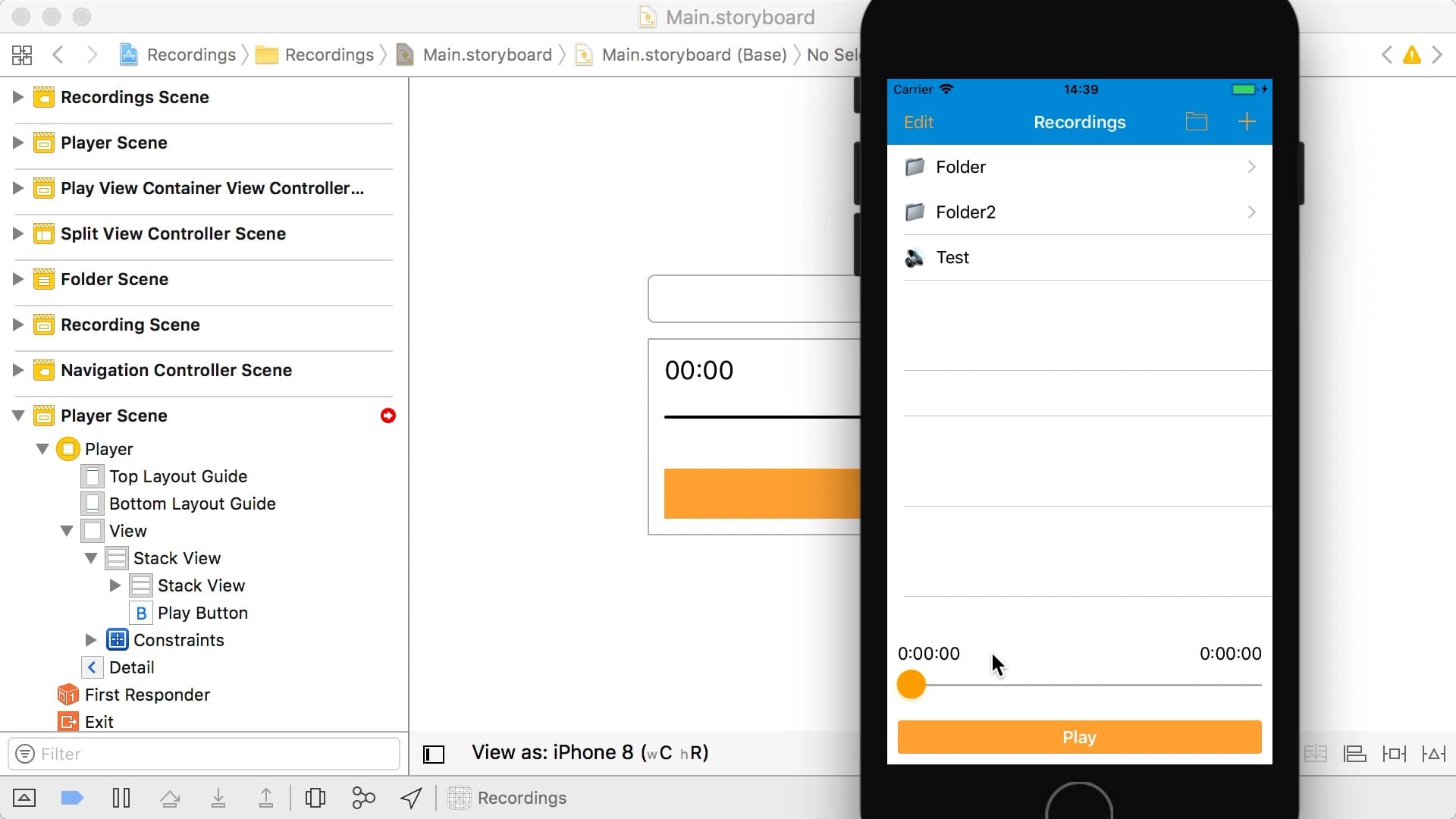 11:00 When we select a recording, we notice we're missing a button to dismiss the modal view controller. We have to add a bar button and use an unwind segue to go back to the folder view controller:

12:40 With these changes in place, we've constructed the new layout of our app and we're ready to update our code and make the mini player actually work. To figure out what needs to be done, we take a more detailed look at the MVC architecture of the app and how the player is currently implemented.

13:11 The diagram below shows how MVC generally works. The building blocks are a view, a controller, and a model. The view sends events, like touches or selections, to the controller. The controller can change the model and observe the model's changes in order to update the view. Ideally, all event loops follow exactly this pattern:

14:23 However, our app has multiple folder view controllers to support the nested folders. This means our architecture actually looks like this:

15:26 The PlayViewController should follow a similar pattern, with a Player as its model. But when we duplicated the view controller in the storyboard, we ended up with this situation:

This way, if we scrub through the timeline on the modal player, then the mini play view controller knows to update its views too, since it's observing the same player.

16:55 There's a bit of work ahead of us to make a single, shared player. We'll need to extract the player code and create a shared instance somewhere. When a play view controller appears, we need to populate it with the player's current information. And the view controller needs to observe the player in order to stay in sync.

17:22 Quickly glancing over the PlayViewController source, we see that the code dealing with the player and the UI is all entangled. The UI code has to stay in the view controller, but all player logic should be extracted and moved into the model layer of our app; the shared player shouldn't know anything about UI.

18:38 How exactly we make the described changes is dictated by the app's architecture. In the book App Architecture, we look at how this app's implementation is very different in various architectures like Elm and MVVM-C. In next week's episode, we'll continue to look at the MVC implementation.