We refactor our code by moving the app's flow from the storyboard into a separate coordinator class. This avoids view controllers having implicit knowledge of their context. 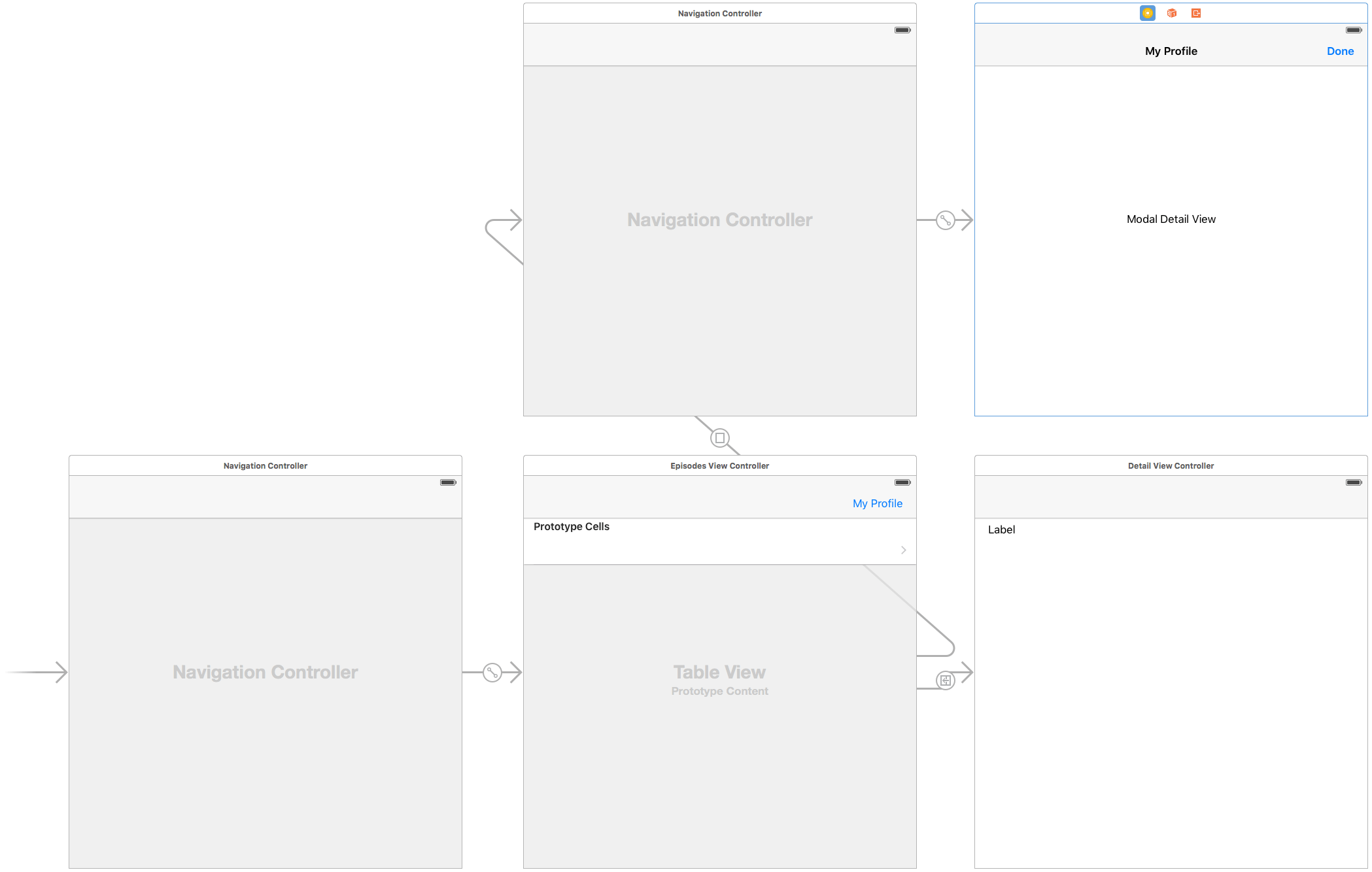 03:33 In our code, we start by removing the prepareForSegue method, along with the unwind IBAction. 03:50 Now we have to find a different way to connect our view controllers. 03:58 The starting point is to override the tableView:didSelectRowAtIndexPath method. 04:07 Within this method, we don't want to push the next view controller, because it would entangle these two view controllers. Instead, we want to control this flow from the outside. That way, the view controllers are standalone and don't know about the context they're used in. 04:28 To achieve that, when a row gets selected, we just call a function, didSelect, with the selected episode:

04:51 The didSelect property is simple — it's a function with type Episode -> (), and we provide a default implementation, which does nothing:

06:03 The force casting isn't nice, but it's a result of us still holding on to the storyboard. We could get rid of it if we would instantiate all our view controllers in code, but as long as we use storyboards, we have to deal with force casting. However, we can create a central place where we do this — for example, in an extension on UIStoryboard.

08:24 In our app, we can now select cells, and the detail view controller gets configured correctly. However, the profile screen doesn't work yet. 08:35 In our storyboard, we have to hook up the "My Profile" button with an action in the episodes view controller:

09:04 We also need to dismiss the profile screen at a later point, so we'll create an action for that as well:

09:31 In the showProfile action, we don't want to hardcode the presentation of the ProfileViewController. Just like before, we introduce a function, didTapProfile, which we hand into EpisodesViewController:

10:13 We do the same thing for our close action in ProfileViewController:

10:45 In the AppDelegate, we configure the didTapProfile property with a closure, which instantiates the ProfileViewController and presents it:

11:37 To make the dismissal work as well, we have to set the didTapClose property. For this, we need to get the ProfileViewController out of the navigation controller:

12:44 This pattern decouples our view controllers: they don't know about each other and they don't present each other. They're connected in a central place outside, so the view controllers don't even know that they're inside a navigation controller. 13:02 However, it's not nice that all this code is still living in the AppDelegate. We need to refactor that.

13:12 The easiest way to improve this situation is to put this code inside its own class, App:

13:54 In the AppDelegate, we create a property for App and instantiate it:

14:27 One problem is that our App.init is a large blob of code. There are many callbacks, including callbacks inside callbacks. We should improve the code by factoring those callbacks out, since the callback situation will only get more complicated with time: each level in the navigation stack will result in another nested callback.

14:50 Instead of configuring a callback with a closure, we can put that code into a method called didSelectEpisode:

15:19 In our closure, we can call the didSelectEpisode method:

15:27 didSelectEpisode sounds like a delegate method. To improve the naming, something more active — like showEpisode — would be better:

15:47 To make it compile, we pull the storyboard and the navigation controller out into properties on App:

16:44 Instead of writing the closure and calling the method, we can directly assign the method to didSelect, which cleans up the code a lot:

17:00 We can do the same thing for the profile selection. We create a method called showProfile and pull out the closure:

17:33 Having these method names really helps readability, as the named methods are easier to understand than all those nested callbacks.

17:47 We managed to keep the view controllers simple; only the app class knows how they're connected. 18:04 To show how easy it is to change things around, we can show the profile view controller when an episode is selected. 18:15 We only need to make changes in this one place, and now our app behaves differently:

18:28 The App class is a dense piece of code, but the rest of the code is very simple and decoupled. 18:52 One problem though: when you see a closure with a self reference inside, you start wondering if there are reference cycles. In our case, there aren't. For example, only the navigation controller references the profile view controller. Once you hit dismiss, the reference goes away. Still, having all these closures in your code might make you think: "Is this still good, or do I have to mark something as weak?" 19:27 When refactoring, it's also easy to introduce reference cycles accidentally.

19:51 Our approach lends itself well to creating more reusable view controllers. For example, we can introduce some generic view controllers to reuse in different places. Let's look at that in a future episode.