We extend the Future type of a previous episode to a simple reactive library. Along the way, we dive into debugging a reference cycle in our implementation.

00:06 In this episode, we're going to build upon the Future type we implemented in a previous episode. Specifically, we'll use the Future type as a basis to build a simple reactive implementation. While a future is an abstraction around a one-off callback, a signal in a reactive library models values over time.

00:38 You'd use a future in an asynchronous API if the call only delivers one result, e.g. most network calls or some expensive computation. In contrast, you'd use a signal if you have to handle multiple values over time, like for a button that can be tapped multiple times, or for a text field that changes its value with each new user input. In the case of the signal, we have to think about some additional issues, like memory management (to avoid reference cycles), and subscription management (to allow clients to opt in and opt out of receiving values of a particular signal).

01:17 The motivation behind writing a small reactive library from scratch is really to understand the concept of reactive programming on a deeper level. Our goal isn't to write production-ready code, but rather to wrap our heads around what's going on behind the scenes when using one of the existing reactive libraries.

01:55 As a first step, we remove the caching of the result, because this doesn't make sense for a signal anymore, at least not in this form. We also remove the initializer, rename the type from Future to Signal, make send public for now, and rename onResult to subscribe. Lastly, we don't clear out the callbacks at the end of the send method, since we now want to be able to send multiple values. This simplifies the code quite a bit:

04:30 The Signal implementation is now very simple, but also very limited. We'll have to add back some more complexity once we build out this type further.

04:49 The first enhancement we'll make is to separate the Signal's API into a sending part and a receiving part. This is a very common pattern in reactive libraries, because it allows you to control who can send new values into the signal vs. who's only allowed to subscribe.

05:22 For this we add a static method, pipe, to Signal, which returns those two things: a function with which we can send new values, and the signal itself, which is read-only. You can take the name of the method quite literally: the returned tuple can be thought of as a physical pipe with two ends. At one end you can insert new values (also called the "sink"), and at the other end you can observe what's coming out:

06:43 With the pipe method in place, we were able to make send private again. The ability to send new values now only gets exposed via the pipe method.

07:06 To try out these changes, we just have to modify our test code a little bit:

Adding a Signal to a Text Field

07:30 Let's put all of this code into a more realistic context. For this purpose, we're going to fake a view controller in our playground and subscribe to a text field's signal in viewDidLoad:

09:05 To make this code work, we have to add the signal method in an extension to NSTextField. In this method, we can take advantage of the send/subscribe separation we've created above — the text field is able to send new values to the signal, while any other code can only observe:

12:39 Since we're not yet holding on to the KeyValueObserver instance, it gets deinited immediately and observation stops. The easiest way to fix this is to just store the observer in a property of the signal. We'll call this property objects for now:

15:33 Unfortunately, we accidentally introduced a reference cycle, which makes it so that the signal will never be deallocated.

15:46 Reference cycles are difficult to debug sometimes, since many objects can be involved in creating the cycle. A very simple technique to help diagnosing these cycles is to add a print statement to a class' deinit. For example, we can try this with our view controller class:

Once we set the vc variable to nil, the view controller gets deallocated and "Removing vc" is printed in the console.

16:33 However, when we add the same debug code to the Signal type, it doesn't get printed in the console. This clearly shows that the signal instance never gets deallocated:

16:57 One very useful tool to further diagnose the problem is Xcode's memory debugger. Since this doesn't work in a playground, we'll just copy/paste our code into a command line project and continue working in there.

17:21 Now we set a break point after we've set the vc variable to nil and run the project. Once the debugger stops on this line, we can open the memory debugger: 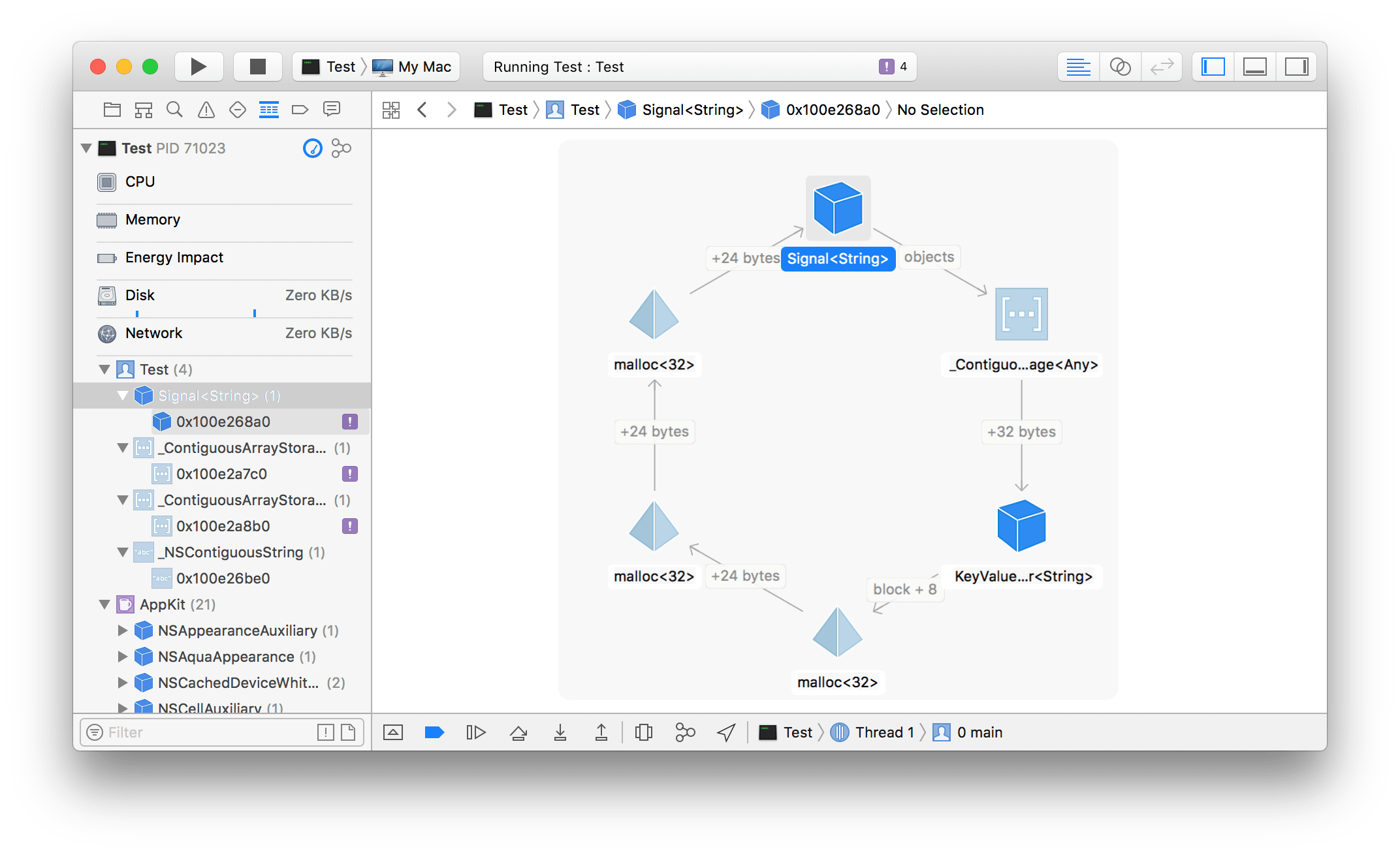 18:16 This visualization can be very helpful in diagnosing the problem. However, sometimes the memory debugger isn't able to generate a graph like this, but it'll still show the objects that are alive in the sidebar.

19:04 Another helpful approach is to sketch out the references of all the objects on a piece of paper. We do this a lot to understand how we've created a reference cycle. In the example at hand, the diagram looks like this:

19:40 This might already look like a reference cycle when you look at the left part of the diagram (view controller – string signal – key-value observer – text field – view controller). However, not all references are pointing in the same direction, so we don't have a problem yet.

19:55 The key-value observer also references the closure that gets called when the observed property changes. In our case, this is the function that feeds the new values into the sink. In turn, the sink strongly references the signal, since the sink is just the signal's send method. So here's our reference cycle.

20:40 For this, we have to modify our implementation of the Signal's pipe method. Instead of returning signal.send, we're going to wrap this in a closure that captures signal weakly:

21:50 With this minor change, the reference cycle is fixed, which we can see from the printout in the console "Removing signal", as well as in the memory debugger.

22:31 In this case, the reference cycle was caused by a mistake in the implementation of Signal. However, there are also cases where it's the responsibility of the consumer of the API to not create cycles. For example, if we were to refer to self in the closure we pass to the subscribe call in viewDidLoad, we would've created a reference cycle between the view controller and the signal. To avoid that, we'd have to specify weak self or unowned self in the closure's capture list.

23:27 With this problem out of the way, we'll add a bit more functionality to our Signal type next time!